The Parts And Components Of An Exhaust System 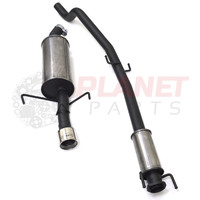 When it comes to car maintenance, what comes to mind? Oil and tire pressure? Perhaps a look at your carburetor, or your transmission fluid? But when was the last time you gave a thought to your exhaust system?

The exhaust system is one of the more underrated sections of your vehicle, but also one of the most crucial. Therefore, it’s important to understand not only its parts and how it functions, but also how it can malfunction…and how to fix it.

The exhaust system varies depending on the type of engine the vehicle, but they almost involve an exhaust manifold, an oxygen sensor in or near the manifold, a catalytic convertor, a muffler, and an exhaust pipe. But what are all these, and how do they factor into the exhaust system? Let’s walk through the process.

Depending on how many cylinders your car has, each engine will have a certain number of cylinder heads. Each cylinder head closes and seals the top of the cylinder head, creating the combustion chamber. This head opens at the end of each cycle to let the exhaust gases out.

The manifold collects the exhaust gases from two or more cylinders (again, depending on the engine type) and merges them in one pipe. Due to financial reasons, manifolds are typically made of cast iron, which presents both pros and cons. For example, cast iron manifolds typically last longer than other materials, such as aluminum or steel. However, they are also less efficient at getting the gases out quickly and orderly.

In the 1990s, most exhaust systems began using an oxygen sensor on or near the manifold to gauge how much oxygen was in the gases. This was due partly so the engine (and therefore the vehicle) could hit emission regulation standards, and also so the catalytic converter could work until optimal conditions.

Before the exhaust gases hit the catalytic converter, they consist of carbon monoxide, hydrocarbons, and nitrogen oxides. Don’t worry if you don’t know what these are – all you really need to know is that they’re harmful to the atmosphere, especially in large quantities. The catalytic converter’s job is to create chemical reactions that change these gases’ chemical states, and thus make them less harmful.

So how does this work? It all comes down to a catalyst, which is coated onto a ceramic mesh with a honeycomb structure. The catalyst itself is usually a mix of precious metals, most often platinum, palladium, and rhodium. This catalyst converts the hydrocarbons into carbon dioxide and water vapor, carbon monoxide to carbon dioxide, and nitrogen oxides back into nitrogen and oxygen.

The cylinder combustion is an explosion, so a muffler is required after the catalytic converter. The muffler is more or less a finely tuned soundproofing instrument, designed to cancel out the sound waves from the explosion.   It consists of a series of chambers with holes drilled into them, which disperse the sound waves more and more until, for the most part, they cancel each other out. Finally, the resulting mix of less harmful gases and smaller sound waves exit the car through the tailpipe.

Over time, the exhaust gases can erode and harm the different components of the exhaust system in different ways. However, there are ways to fix each part, or replace them if necessary.

The exhaust manifold constantly comes in contact with extreme heat and pressure, so it stands to reason that its most common problem is leaking. Over time, this heat and pressure and wear down the structure of the manifold, creating cracks in the gasket (the piece that seals the cylinder head). If the cracks get large enough, the exhaust gases can leak back into the car.

Oxygen sensors don’t suffer as much physical damage, but they can still be easily worn down over a long time. They’re built to last between 50,000 and 60,000 miles, but they can wear down sooner, leading to inaccurate measurements. This is usually indicated by the “Check Engine” sign on your dashboard.

The trouble with having such a fine filter in the catalytic converter (the holes in the mesh are less than a millimeter wide) is that it occasionally gets blocked by the particles in the gases that build up and block the airways. This leads to less power in the engine. The muffler, on the other hand, can rust, indicated by a rattling sound or the car engine running louder than usual.

If you notice any of the above, it may be time for an upgrade.

Factory-issued vehicles tend to cut costs by making exhaust pipes (between the manifold and converter, converter and muffler, etc) smaller in diameter. This restricts the exhaust flow, which can block the exhaust gases and create what’s called backpressure. Choosing custom-made, or “aftermarket” parts can clear this up, but what is important to look for?

This first thing to be aware of is the design of the parts. Aftermarket parts have wider-diameter pipes, and are designed to get the gases and particles through the exhaust system with as little resistance as possible. Both manifolds (called “headers” in aftermarket lingo) and mufflers are designed to reduce backpressure, and are easily available online. Quite a few parts are mandrel-bent as well, meaning a support is placed inside the pipe during the bending process and removed afterwards. This prevents wrinkling of the pipe.

As we’ve seen, the exhaust system is just as vital to the function of a car as the engine itself. This means it’s just as important to understand not only how it works, but also how it can go wrong…and how to fix it. Knowing what to look for when upgrading your exhaust system can be the difference between life and death for your car.

All Prices are in $AUD

Select Afterpay as your payment method

Use your existing debit or credit card

Complete your checkout in seconds

All your need is:

1) An Australian Visa or Mastercard debit/credit card; 2) To be over 18 years of age; 3) To live in Australia